From & to every destination

For you and your fellow travelers 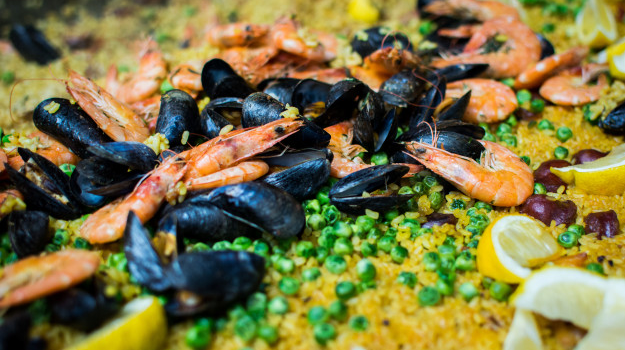 Good food is included when you go on vacation. Spaniards love nice and long dining with small snacks (tapas).The evening meal is eaten a lot later than here in the Netherlands. Instead of 6 o’clock in the evening, you only sit there around 9 o’clock in the evening. Of course you can eat a lot of seafood and fish dishes on the Costa Blanca and there are many nice restaurants along the coast.

Iberico ham
The Spanish Iberico ham, also known as “pata negre” (black leg), is only made from Iberico pigs that have eaten 10 kilograms of acorns per day in the last four months of their life. This special diet ensures that the pigs arrive about one kilo every day, and in combination with the long drying and ripening process gives the ham its characteristic nutty taste. The ham is dark red in color and has a fine structure.

Tortilla
The word “tortilla” means that most people may think of Mexican cuisine. However, this traditional Spanish dish is something completely different. Here it is also known as a Spanish omelette. The dish consists mainly of egg, potato, and onion, but there is plenty to vary. Chorizo, cheese, and various vegetables and peppers are often added.

Paella Valenciana
A lot of rice is grown in the Valencia area, especially with the aim of making it into paella. The main ingredients that distinguish the Valencian regional variant from other paella recipes are chicken, rabbit and sometimes also snails. Moreover, there are also variations with shellfish and crustaceans, and of course vegetarian paellas. The yellow color comes from saffron. In Spain it is tradition to eat paella on Sundays, usually at lunch. On holidays the paella is often freshly prepared on the street, so if you want to see with your own eyes how to make the tastiest paella it is certainly worth a visit.

Horchata
Horchata is a typical Valencian drink of milky substance, made from water, sugar and so-called “chufas”, often translated as almond or tiger nut. The drink is served ice cold, often with an airy, sweet pastry with powdered sugar specially made to dip into the horchata. Highly recommended.

You can find out more about which cookies we are using or switch them off in settings.

This website uses cookies so that we can provide you with the best user experience possible. Cookie information is stored in your browser and performs functions such as recognising you when you return to our website and helping our team to understand which sections of the website you find most interesting and useful.

Strictly Necessary Cookie should be enabled at all times so that we can save your preferences for cookie settings.

If you disable this cookie, we will not be able to save your preferences. This means that every time you visit this website you will need to enable or disable cookies again.

This website uses Google Analytics to collect anonymous information such as the number of visitors to the site, and the most popular pages.

Please enable Strictly Necessary Cookies first so that we can save your preferences!